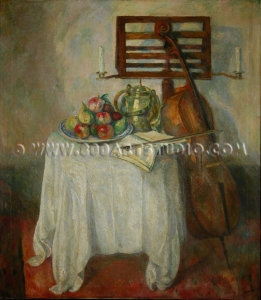 The term “post-Macchiaioli” has come to be used for all Tuscan painters active from the 1880’s to around 1920. These are artists who, for the most part, were disciples of their more famous predecessors: students from Giovanni Fattori’s School for Drawing Nudes in Florence and apprentices of Silvestro Lega, mentored in the house of Tommasi at Bellariva. They were Tuscan painters, bound to their own region, which they considered to be an inexhaustible source of inspiration and study; many chose the Maremma as their special territory, others their city of origin, and still others the region of the Torre del Lago and the Versilian coast.

The term “labronico” comes from Latin; it is used to indicate the stretch of the Tyrrhenian coast that runs from Livorno to Castigioncello. Indeed, most of these painters came from Livorno, and the city was a continuing source of inspiration for many of them. But others found inspiration for their work in the region immediately along the coastal strip. In the first twenty years of the new century – more precisely, in 1908, the year Giovanni Fattori died – this group made the Caffè Bardi in Livorno into a gathering place much like the Caffè Michelangelo had been for the Macchiaioli in Florence, that is, a fundamental spot to rediscover and reconfirm their work. The Labronici Group continues even to this day in Livorno and is part of the contemporary artistic reality of the city.